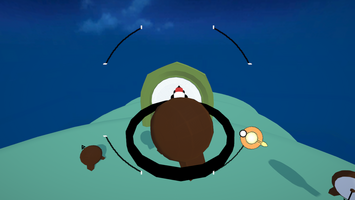 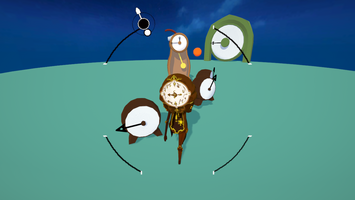 This is an update to discuss the new build of the project, and why it's more of an 'in-between' build then final release.

First though, below is a list of the changes made for this new build:
- Character model and animations upgrade (a main focus, to fully realize the original awesome concept art by Woestijn)
- Camera movement (now controlled with the mouse)
- 'Long Hand' action
Your time now moves slowly, with spacebar speeding it up when held. This puts you in a bit more control of the pace of its rotation letting you move more focus to matching the other clocks timings, but still leaves some agency.
- 'Short Hand' action
A few small timing tweaks. The main change is the color highlighting to better indicate the current charged strength of your launch.
- Enemy hand rotation
Now the enemy hand rotation is consistent, being after every 2 hops. A random factor is which direction it will rotate in though.
So You'll still need some focus to know which way it will rotate to end them faster if trying to beat your completion time.
The overall intention though is now with some going clockwise/counter-clockwise they're will more often be one matching your time/the time of the door to unlock.
Main missing elements, delayed for reasons further below:
- 'Final Boss' Grandfather clock's projectiles still do nothing (intend to have them add time to your score). Projectiles also have no effect so they have no impact.
- Additional stage implementing a light twist on how to match enemy times to cross the bridge (will likely replace stage 4, with stage 3 moving to stage 2).
- Sound

Bolt, the visual scripting tool I used to work on this project will eventually be releasing a version 2 (potentially many months away).
I've been following it and it looks amazing, however there's quite a large restructure of how you'll want to approach projects in it.
I already have an idea of a project I'm looking forward to making in it, having experienced the flow of visual scripting with it during the game jam. However the casual longterm scope/expansion of the project would benefit a stronger understanding of Bolt's version 2 before starting it.

So, rather than spending time building a final release of this game with V1, I'm planning to use the fact this is a small project as a good building block for learning V2 when it's eventually released. So I'll be rebuilding this at that point.

This means that now I'm currently back working on my RPG Maker MV project, an extensive overhaul of Colossal Conquest.
I've pushed through many iterations of it, as I've been constantly thinking about it since it's release ages ago-however life as it can do got in the way of its evolution. However thanks to the incredible contributions of the community I've now got more tools to build it up with.
I'll be making a separate devlog for that hopefully in the coming weeks when I've got more to show-I had hoped to have something now but didn't want to delay the update of this project any longer.
I do have a strong foundation for the project now and a better plan on how to approach it with what I need to achieve from it, so I'm looking forward to developing it and sharing it as I'm able.

Get Your time ends now

Defeat challenges by killing time, at the right time.