'Intended to be an enjoyably light, adventure through discovery. Learn and collect experiences and the necessities required to complete your full journey.'

The 'goal' and gameplay, involves highlighting your choice of action, above what you have collected on your journey so far, which will resolve at the timing of the top bar.
Puzzle through the full 2 minute quest and return home successfully.
Can you bring home the collection of a lifetime, or will your adventure be cut short and end up as little more than a forgotten trip?

This was designed and paced with the background 2 minute music piece in mind, as part of the game jam it was made for explained in more detail below.
So though the intended experience, especially during your early learning and discovery, is to play 'as is', you can choose to disable the timed actions in the main menu.
I'd like you to at least wait a few attempts before enabling that though or you'll lose the chance for that experience.

This is meant as an enjoyable relatively quick experience/journey to completion.
So no more post-game jam expansions or concepts would fit the goal here, as such I've updated it with some feedback to improve action clarity, a less empty finish during attempts where you don't reach the end, some better encounter chance distributions, the option to disable the timed actions, and other minor tweaks/fixes.
I've also removed the original game jam release in favor of the now working web build, as there's no value in that version.
Hope you have fun with this, but report any bugs I might have still missed.

Mobile -
This can be played from here on mobile, but Unity webgl on mobile browsers isn't perfect (you can see that attempting to press the credits button multiple times), however gameplay-wise it works (tested on android).
So the option is there, but don't mistake this as an experience you're meant to frequently come back to as a result. It's just a short adventure of discovery with the goal to reach the end of the music piece and return home. As such there's also no 'official mobile release' planned.

Game Jam -
This was developed for the Vimlark/8 bits to Infinity gamejam , with the theme of "There and back", mixed with the focus of "Collectables"
I also opted for one of their additional challenges, "In a Song: The game is as long as a single backing music track"
Regrettably didn't get time to properly integrate the 'Hidden Secret', though that was another part of the concept that let me to this games design.
* For clarity: I didn't make the art/music/sound/fonts in this for the jam, noted in the games credits, they were available free to use as per the rules*-

Special thanks to the dev Wahid behind uNode, that continues to work hard making that visual scripting solution awesome and stable, allowing me the opportunity to join and submit into another game jam. 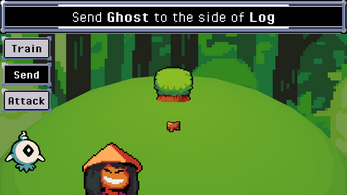 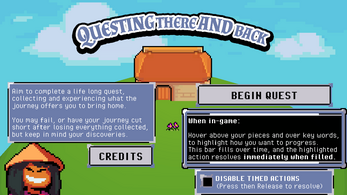